When Eliza Rose found out she was a witch, she thought she’d be casting spells…


However, it turns out Eliza is on her way to becoming a mystical assassin. But first she has to start college with her best friend Dawn Roberts and her feline familiar Jared. If you think college is stressful, try finding your best friend being seduced—nearly to death—by a venomous fairy. Something is horribly wrong, and Eliza must find out what it is.


Murderous mermaids, seductive fairies, and manipulative elves are terrifying enough, but pure witches can become corrupt…and they’re the most dangerous creatures of all. Eliza struggles to discover the source of this chaos, but is repeatedly attacked—and saved by a shadowy figure. On a very personal note, Eliza must learn whether corruption is beginning to claim her mother.


Her strongest ally might be handsome, enigmatic Donovan—but he is hiding a shocking secret…


Donovan wants nothing to do with his old gang—not after the things they’d made him do. But when he meets Eliza, he’s both frustrated by her amateur skills and impressed by her emerging strength, and he feels compelled to help her grow into the assassin she’s meant to be.


Every answer has a price, and there are beings born to corrupt the pure.


Eliza fights to master her skills before it’s too late, while Donovan must determine whether Eliza can be saved…or if she must die to keep her out of the hands of those who would use her powers to reign over all of Mystical. 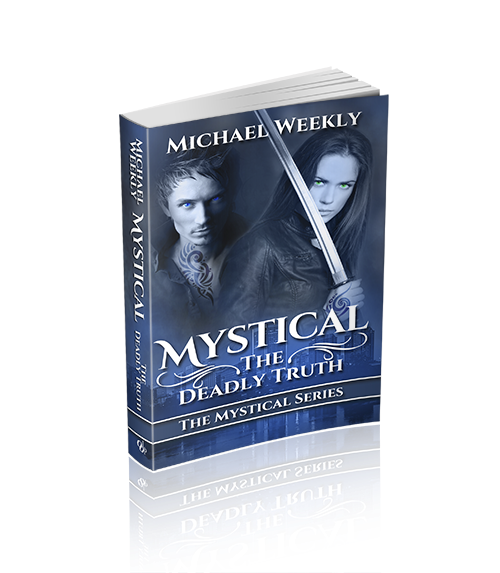 I kneel down and pull out my silver dagger slowly from my black boots. Tugging the dagger out carefully with my index finger and thumb, I structure a plan to save the girl in my head. One of the things mom said to herself when I eavesdropped repeats in my head: “Mystics, they are disguised amongst people.” I narrow my eyes and lock them on the creature before me.
I attempt to move and save her. Instead, I clench my hands into a fist, my throat is dry, and  my heart drops inside of my chest. My hands are shaking, and I’m struggling to breathe properly. I can’t lunge forth. I’m too nervous.
I press my lips together. Anxiously, my eyes slide from left to right as I try to think of what I can do to save this innocent girl. I glance down as soon as I hear something moving below me. Gravel on thin strands of weeds puckers out of the ground slowly and slithers up my calves. I cringe as the feeling of the moist dirt on my skin stings my legs.
The sweet wind his wings create brush against my face, intoxicating me and causing my neck to numb. I become drowsy, my vision becomes blurry, and I forget about trying to save her. I’m paralyzed in this peaceful reverie. The smell of fresh roses controls my thoughts and actions. My eyes daze and, though I blink twice to wake myself up, I don’t want to fight against this calm feeling.
It feels amazing.
The weeds continue to wrap around my legs, holding me in place. I shake my head, trying to fall back into reality. I press my lips tightly together and focus on cutting off the weeds slowly. With each slash, it feels like my movement and reactions are slowing down. It must be the scent causing the nerves in my body to act strange. I cover my nose and continue cutting the strands of weed silently. Each cut increases the growth beneath me. The mud from the gravel thickens, gluing me further in place.
The girl moans in pleasure while the weeds attach to me and cling onto the fabric of my clothing. The noise she is making and the weeds from underneath me are overwhelming me. My heart picks up frantically, and my lips feel dry.
The strange creature caresses his prey’s bruised body. There are glowing hickeys all over her skin. He allows the weeds to slither around her neck slowly. He leaves another colorful hickey on her skin. He kisses her neck, eventually pulling on her skin with his sharp teeth.
The scent of his tongue sliding slowly on her neck flows over to where I’m being held captive. My lips part as her eyes roll back into her head. I can feel my mind and thoughts drifting away with her. I want the creature’s lips on my skin just as much as his prey does.
Think, Eliza, think. Stay focused.
I shudder as the cold wind tickles the tiny hairs on my skin. The guy stops kissing the girl and the moans fade away. He looks up and scans his setting. His eyes lock on my hiding place. I increase my cutting movement as fast as I can. He smirks at me with colorful drool dropping to the ground from his white blade-like teeth. His red lips glimmer in front of me in the shadows.
He lets the weeds take over the girl’s body, preserving his meal for later. She is still stuck in ecstasy. Her eyes slide in my direction. Even though she must be in pain, she’s smiling. Weeds form around her body, slither up, and then slap across her eyes and mouth.
The creep holding her captive flutters toward me slowly. He reaches out as weeds beneath the ground and roots spring up and wriggle around my ankles and neck. They travel up against my thighs and then slap across my mouth, preventing me from screaming. I am lifted up against the wall, just how the girl is in front of me.
I raise my dagger to try and cut the weed covering my mouth, but I lose my grip and it falls to the ground. I panic, struggling to breathe, but the same scent crawls into my nostrils. Its sweet taste overpowers my senses. My heart beat slows down drastically as my eyes follow the monster, who is floating in front of me, grinning wickedly. He touches my skin with his soft hand, sizzling and calming my emotions.
My heart skips a beat. It’s finally my turn.

Michael believes he is a mad scientist experimenting with his own imagination. He enjoys world building and having alluring conversations with his stubborn characters. He is your author of The Mystical Series. Specializing in many genres such as Fantasy, Urban Fiction, Dystopian, Young and New Adult.

Most of his inspirations come from fairy tales, music, and his curious what ifs. He’s never thought of being an author, writing was just a hobby to him. However, one day his thoughts and ideas kept interrupting his daily life. At work he’d come up with story lines and decided to join the reading/writing app Wattpad, and there he would write. Realizing the enjoyment from creating characters and worlds doesn’t stop him from ever jotting down a potential story.


You can find him anywhere to snuggling in a comfy seat with hot cocoa Netflix binging, or taking a soothing walk along the forest lines. Possibly diving in a tank with sharks, but that would be too insane.


He is a shopaholic east coaster living in Virginia with his fury companion Coco.


Where the two live happily ever after.

January 1 Spotlight
Around the World in Books
http://www.aroundtheworldinbooks.ca/