What if the best night of your life was also your last?

On the eve of a much-anticipated proposal, Meg is happier than she could have ever imagined. The future she sees for herself on that magical night is bright, one that’s full of love and laughter and dreams finally realized.

That is, until one random act of violence changes everything…

Consumed by fate and forces she can’t comprehend, Meg finds herself at the center of a spectral conflict that transcends life and death.

Her very soul is up for grabs in this war, and what’s worse… she’s not the only one.

Now, she’s fighting not just for the love she lost, but the daughter she would have called her own. She must fight the battle of her life, for the sake of her friends and family, and find out for herself if love can indeed be stronger than death.

Intertwined with true-ghost stories, some heart-warming, some heart-breaking, this love-note to San Antonio combines history, myth, and vivid description.

This is the full story of Meg & Amelinda's quest-journey, what author Laura Metzger calls "A beautifully written story with compelling characters that reach between the universe of the living and the dead to embrace their mutual destiny" and author Elena E. Giorgi calls "A beautiful tale of love and redemption."

On the day I died, I was wearing a great outfit. This is important to know because it turns out that your default look for eternity as a ghost is what you’re wearing when you die. I mean, seriously. Who knew? If I’d have known that, I wouldn’t have risked any days in mediocre clothes. In that respect, I was lucky I was on a date when I was killed, but of course, if I hadn’t been on a date, on that date, maybe things would have turned out differently.
Not everyone gets to be a ghost. In fact, some people disappear immediately, and I don’t know what happens. But they just wink right out of existence, only out of their bodies for a few seconds. Maybe it has something to do with intent, or their last actions, or their own belief systems. I hope the good people go somewhere good, no matter what they did in the last moments of life, that there is a way for them to make up for those Big Mistakes.
Some people, people who haven’t Figured Things Out, people like me, linger for a while. We hang around those we love and sometimes try to influence their choices, trying to keep loved ones from making Big Mistakes.
My grandmother had been my ghost–I was not surprised when it came right down to it. Back when I was alive, I used to smell her perfume in the apartment we shared, vanilla and lavender. I could never figure out what actual perfume brand she wore to get that scent, and believe me, I tried. I loved it and wanted that for my signature perfume. I haunted the local drugstores, especially the old ones, and vintage stores, looking for an old- fashioned perfume that featured those fragrance notes, but never found anything that smelled even remotely like hers.
I guess it was just her individual magic that combined the scents that way. It seemed to linger in our apartment, long after she had been gone. Especially at certain important moments. I wouldn’t know those moments were important ‘til later, but looking back, it’s obvious.
I’m getting ahead of myself, moving way too fast for normal people. First, you probably want to know more about me, right? You can’t just start in the middle of the story; you have to work up to these big deals. I made it 23 years on the planet before checking out. I guess you’d say I was pretty, although I was never very stylish or together. I thought that would come with maturity, but I never got to find that out. When I died, I had shoulder length wavy copper colored hair, cut in a bob that was always tickling my chin and sometimes made me want to cut it all off. I certainly never had the patience to grow it all out. It was “in between” hair, lack of decision hair. My eyes were basic gray, nothing exciting, although I desperately wanted the “limpid blue” or “decisive green” eyes of a romance heroine. A light plague of freckles scattered across the bridge of my nose showed my Irish- Scottish mutt background, and I had fair redhead’s skin that burned, rather than tanned, which kept me indoors most of the time or slathered in sunscreen. 5’8’, skinny without being too skinny. I did have my family’s big butt, which we will not discuss.
Why I have to go through eternity with that butt is beyond me. I tended to prefer jeans and a comfortable cotton shirt, paired with flat old- fashioned Converse tennis shoes as my daily outfit, but I could clean up pretty nice when I had to.

Kim wrote her first critically acclaimed (if you call her fourth grade teacher a critic, and she does) short story when she was 9 years old. It was about Christmas in a Cave, and it featured such topical, ground-breaking subjects as homelessness & cave dwelling. She's been writing ever since.  The state of publication depends on who you ask.

She has a Ph.D. in Literature, with specialties in American Lit, Women Writers, Feminism, Sci-Fi/Fantasy & Film Studies but please don't hold any of that against her. She teaches academic writing and how to read literature at a university in her hometown and tries to convince college students that it really is cool to like poetry.

She lives in the South, has twin children (one girl, one boy) and a husband who is the model for all her best romantic heroes. She also has two cats-- one black and sassy, one stripey and fat, and also kinda sassy. 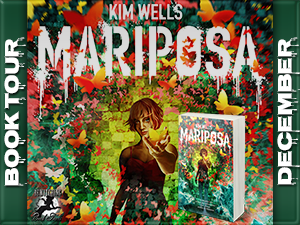 5 Coupons for Audible audio of Mariposa