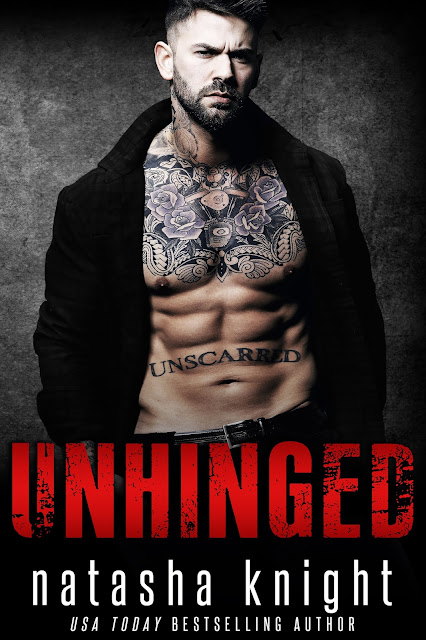 But he’s back. Risen, like Lazarus, from the dead. And he’s dark. Darker than he was before. More dangerous. Unhinged. A scarred, tattooed savage.

The way he looks at me, it should terrify me, but I’m drawn to him, to his intensity. Consumed by it. By him. Even though I know if I’m not careful, his obsession will destroy me.

I should have died that night two years ago. My mistake cost my men their lives. It should have cost me mine. But I survived. And the day I learned she did too, I made it my mission to find her.

I sought her out. Tracked her. Shadowed her every move. I’ve been inside her home. Eaten her food. Drank her liquor. I’ve stood beside her bed and watched her sleep.

She has so many secrets, and I know one of them. It’s the one where our pasts collided. The one that destroyed me.

And it’s the reason I’ve come for her. 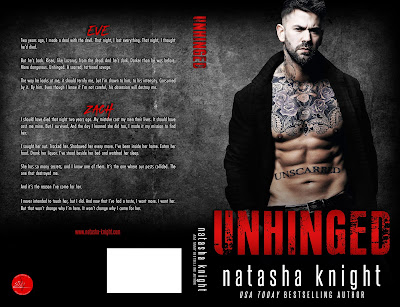 
USA Today Bestselling author Natasha Knight writes dark romance as well as spanking romance in a variety of genres including contemporary, paranormal, post-apocalyptic, science-fiction and fantasy. She is a #1 Amazon Bestseller in multiple categories forever searching in every story for that single most important element of love. All of her stories contain at least one kinky Alpha male, lots of dirty talk and a well deserved happily ever after. 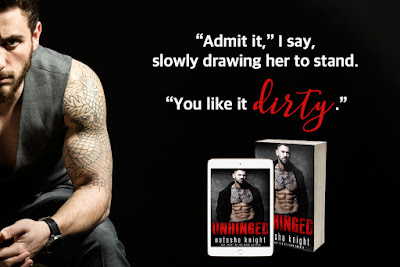 We are delighted to announce the PRE-ORDER AVAILABILITY of Diomere's Exile by Sabrina A. Fish. Check it out and reserve your copy today.
Official release date: September 29, 2017.

Series: The Gate Keeper Chronicles Book 1
Genre: Fantasy Romance
Publisher: The Wild Rose Press
Add to Goodreads
An exiled woman seeking redemption, and the man who distracts her from finding it.
Five Gates. Five Sisters. Five Very Different Men.
Once there were two worlds connected by five magical gates. Then the Gate Keepers closed the gates and disappeared. The Gate Keepers have returned.
Nadia de Quinones was exiled when her nephew, the crown-prince was abducted on her watch. She’ll let nothing stand in the way of her redemption, not even discovering her heartbonded and a connection to an ancient magical gate.
Lord Gregor Cyrene is sworn to protect his country's royal heirs. After the youngest prince’s life is threatened, Gregor sets out to discover who is responsible and suspects the answer lies with Nadia.
When fate forces their competing goals to align, neither are prepared for the irresistible attraction between them. Can they see beyond their pasts and a millennia old hate between their people? Or will they continue to distrust, allowing those plotting against them to win?

About Sabrina A. Fish

Sabrina A. Fish lives in Oklahoma with her husband, son, and two cats, where she owns a trophy company and collects names for her novels from lists of award’s recipients. She loves all things chocolate and her husband is sweet enough to never let the candy dish near her computer become empty.
She loves and advocates being involved in the local writing community, and is President for the 2018 Oklahoma Writers' Federation, Inc (OWFI).
She is an annual featured speaker at The Rose State Writing Conference and has been a panelist at Wizard World Comic Con.
Born and raised in Oklahoma, she considers the three years she spent in a Texas high school to be a short trip down the rabbit hole that ended at graduation. She returned to Oklahoma where she received her Bachelor's degree in Political Science from the University of Oklahoma. BOOMER SOONER.
When she isn't writing & promoting her novels or running her company, she can be found reading, scrapbooking, or spending quality time with her family.
To find out more about Sabrina and her books, visit her website https://www.SabrinaAFish.com
Official website: https://www.sabrinaafish.com/
Connect with Sabrina A. Fish on social media:
Facebook | Twitter | Goodreads | Amazon Author Page | Instagram | Pinterest | Linked-In

About The Wild Rose Press

Book Unleashed Blog Tours
at 7:00 AM No comments:

From New York Times bestselling author Sylvia Day...Businesswoman Gia Rossi is determined to be successful in her new job, but when her ex lover Jax Rutledge waltzes back into her life, their passionate connection ignites not only in the boardroom, but the bedroom.
Streaming this November on Passionflix.com
You know you wanna watch...

Want to become a founding member with all kinds of perks? Find out more here: http://www.passionflix.com/signup#09923
Sign up by August 31st to become a founding member and enjoy perks like behind the scenes sneak peeks, first look at features, and on-set access!! Pre-subscribers, you get your subscription rate locked in at $3.99 a month!
Subscribe here: http://www.passionflix.com/signup

With her magic restored, her best friends living happily ever after together as humans,
and the love of her life waiting patiently for her on the other side,
Bonnie Bennett is not going to just sit around and let her life pass her by.
She’s off to see the world!
Join Bonnie as she journeys around the globe,
encountering supernaturals in the most unexpected of places.

ONE SERIES YOU WON'T WANT TO MISS

Want to be kept up to date on all the latest news
regarding the Bennett Witch Chronicles?
Sign up now for the BWC Weekly News!

A Legacy of Freedom Blog Tour!

School’s over, and Hunter McCoy has a request of his newly-found dad. He wants to work for Citadel Security for the summer. With Jack Crismon as a grandfather, he’s decided he might want to look at criminal justice instead of a law degree, and getting a little hands-on experience is the only way he’ll know what he should do. But the benign job Steve gives him as a bodyguard for an old business contact, Burton Calvert, turns out to be a horrible mistake when it’s discovered that the guy is in cahoots with the infamous criminal Crismon. Worse yet, Calvert keeps a stable of barely-legal young men captive for use by his business associates. He couldn’t have known that Hunter was gay. No one did. And to Hunter’s horror, one of the slaves the criminal offers to his accomplices is the young McCoy’s dream come true. They fall helplessly and hopelessly in love, only to find that things are much worse than they first appeared and everyone’s lives are in danger. It only takes one massacre for Hunter to know he has to do something drastic. But what? As things deteriorate, danger gets ever closer until one fateful night when everything is on the line. It could all go up in smoke with one big bang, and the only ally Hunter can rely on is an enemy. It’s time to trust someone. All Hunter can do is hope that when he makes the choice between the devil and the deep blue sea, he chooses wisely. Otherwise, everyone will die. The second book in the Legacy series and the tenth in the Love Under Construction saga, A Legacy of Freedom is Hunter’s story, a story of imprisonment, sometimes at our own hands, and the courage it takes to break free. Sometimes, the worst prison we can inhabit is the one we make for ourselves.

International Bestselling Author Deanndra Hall lives in far western Kentucky with her husband of 30+ years and three crazy little dogs. She spent years writing advertising copy, marketing materials, educational texts, and business correspondence, and designing business forms and doing graphics design. After reading a very popular erotic romance book, her partner said, “You can write better than this!” She decided to try her hand at a novel. In the process, she fell in love with her funny, smart, loving, sexy characters and the things they got into, and the novel became the Love Under Construction series.
Deanndra enjoys all kinds of music, kayaking, working out at the local gym, reading, and spending time with friends and family. And chocolate’s always high on her list of favorite things!

You don’t know what you’ve got until it’s gone…
Police academy cadet Charlie Burns can’t believe his luck when the gorgeous blonde he meets in a bar murmurs those magic words: “Nothing serious, ’kay?” Mind-blowing, no-strings sex with Ever Carmichael—it’s the holy grail of hookups for a guy who’s too busy following in his law enforcement family’s footsteps to think about getting serious. Charlie’s all about casual…that is, until Ever calls it quits and his world tilts on its axis.
Ever knows that when you control the relationship game, you can’t get played. But for the first time, she wants more than short-term satisfaction. Step one: end her fling with commitment-phobic Charlie. Step two: sacrifice herself to the ruthless NYC dating scene. Yet everywhere she turns, there’s Charlie, being his ridiculously charming self. No online match or blind date compares to the criminally hot cop-in-training, but they’re over. Aren’t they?
If love is a four-letter-word, why does the idea of Ever seeing someone else tie Charlie up in knots?  Now he’s desperate to win her back…and a little date sabotage never hurt anyone, right?

Tessa Bailey is originally from Carlsbad, California. The day after high school graduation, she packed her yearbook, ripped jeans, and laptop, and drove cross-country to New York City in under four days. Her most valuable life experiences were learned thereafter while waitressing at K-Dees, a Manhattan pub owned by her uncle. Inside those four walls, she met her husband, best friend, and discovered the magic of classic rock, managing to put herself through Kingsborough Community College and the English program at Pace University at the same time. Several stunted attempts to enter the work force as a journalist followed, but romance writing continued to demand her attention. She now lives in Long Island, New York with her husband and daughter. Although she is severely sleep-deprived, she is incredibly happy to be living her dream of writing about people falling in love.

This promotion is brought to you by Pure Textuality PR.

Seventeen year old Grace Delaney has been building up the courage to tell her best friend Aaron Wheeler that she is in love with him, but before she has a chance to, he is killed. She swears to never love again, until Chase Ryder walks into her life-a notorious bad boy from her home town. Everyone knows that Chase has spent time in juvi, but no-one knows why. Grace is determined to stay away from him, but Aaron's ghost keeps appearing and keeps telling her to move on. When Grace finds out that Chase, like her, had a damaged childhood, she finally understands why he pushes people away. She decides to try to break down those walls he has built around himself and show him that he is worthy of love. Grace is hiding a secret of her own about a life she lived before she met Chase. She tries to hide her past from him, but that secret is exposed. They learn to trust each other and fall in love--but then Grace finds out the truth about what really happened the night Chase’s father died. If Grace can't learn to accept all of Chase, including his past, she risks losing her second love, too

TJ Rudolph is a financial administrator from Cape Town, South Africa-a beautiful Town placed between the mountain and the sea. She started writing at the age of twelve and has recently taken to writing romance novels. If you don’t find her stuck behind a computer. You will probably find her writing music and playing her guitar... She spends most of her time reading, watching TV series, listening to music or spending time with her kids and husband. She loves all things colorful and is a hopeless romantic in principle.