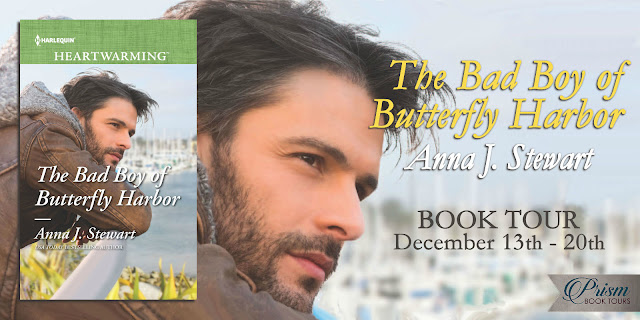 Grand Finale for
The Bad Boy of Butterfly Harbor
By Anna J. Stewart


We hope you enjoyed being introduced to Butterfly Harbor and its residents, especially Luke and Holly. If you missed any of the excerpts, interviews, or reviews, feel free to go back and read them and enter the Amazon gift card giveaway while you can...

Launch - Intro to the Book

Butterfly Harbor, California is a town on the verge of collapse. People have left, businesses have closed, and the infrastructure is in desperate need of, well, a lot of helping hands. The idea of community coming together to save something as important as the town they live in holds tremendous appeal. THE BAD BOY OF BUTTERFLY HARBOR, the debut book in the series, sets the stage for serious change, not just for the town, but for a few residents in particular.


underneath the covers - Excerpt

. . . He could manage a year in Butterfly Harbor.

Or so he’d told himself on the cross-country drive.

Luke glanced over as she swept out of sight into the kitchen, her shoulder-length brown hair tumbling in waves. She’d been pretty as a girl, but as a woman she was stunning.


I Am A Reader - Excerpt

Holly didn’t want to think about how “shiny” Luke Saxon had turned out. It had only been an hour since Luke had walked into the diner—an hour she’d spent scrubbing every pot and pan in the kitchen. Anything to distract herself and put her anger to some use.

1. When did you first consider yourself a writer?

Honestly? I think from the time I wrote my first story as a freshman in high school. I’d always loved making up stories and playing make-believe, but when a group of friends and I started writing mini romances (soon after I discovered reading romances), the world kind of opened. My grades sure suffered, but I couldn’t stop writing.

Now that Holly stepped away from the past, she was able to see those smooth edges her best friend mentioned. While she could still see the angry, abused teenage Luke lurking behind those blue eyes, the man standing in front of her seemed weathered and in control of what had weighed him down for so long. Both the easy smile he gave Abby and the guarded but polite glance he aimed in Holly’s direction had her regretting the vehemence of her earlier anger.


Getting Your Read On - Review

"This book focused more on healing and redemption than on romance. It was a community book and by that I mean that while there were a couple of main characters, it was more about the whole community than just those two characters. This book felt to me like made for TV, feel good film. I would watch this book on TV! I enjoyed my time in Butterfly Harbor and look forward to going back again with another character."

“Thanks, Gil.” Luke’s stomach gripped his still digesting lunch. And here he thought facing Holly or her father would be the hardest part of his return. Going back to the house he’d sworn never to step foot in again... “I’ll catch up with you next week to talk about the department budget.” By then he should have his bearings.

3. Where do you get your information or ideas for your books?

From all over the place. THE BAD BOY OF BUTTERFLY HARBOR was inspired by Monterey, CA (and its sister city Pacific Grove). I had one heroine (back when I was writing urban fantasy romance) who shot into my head when I was at a Georgia O’Keefe and Ansel Adams exhibit at an art museum. I think it was all the polished wood and atmosphere—she was just there, clear as day. TV inspires me a lot—I can figure out plot twists and see them coming a mile off, so it teaches me how not to do that. Anything at any time can pop a story or character into my head. It’s one of the reasons I love being a writer so much. Inspiration is everywhere.

And he still wore a black leather jacket and carried himself with a self-assuredness that was both enviable and off-putting. His onetime too long ink-black hair had been shorn into shape, his pasty complexion replaced by what looked like years spent in the sun. The sad stone-blue eyes she remembered in the face of a sullen boy had turned to steel in the span of twelve years. She saw life painted on his handsome face.

"I love how real the characters in this story are. They are very well-developed and totally make you feel like you know them in real life. I love the setting of the story and the story itself. It is a clean book, yet it is filled with true romance. I love that!"

“Yeah.” She shuddered, her brain going fuzzy as electricity zinged around her. Another couple of seconds and she could have been under that branch. She shrugged off his hold despite the comfort his hands provided. “You win."


Thoughts of a Blonde - Review

"A touching story about redeeming yourself after a past you are not proud of."

"The story was interesting, the characters believable and the second chance was one both Luke and Holly deserved. Easy reading with a happy ending. "

"Author Anna J. Stewart’s latest Harlequin Heartwarming novel, The Bad Boy of Butterfly Harbor, is a beautiful and inspiring story about learning from current and past mistakes, forgiveness, change, and love and friendship not only between adults, but children as well."

"I loved all the characters in this story–Holly and Luke, along with their large cast of secondaries. This series has real potential, and I’m looking forward to my next trip to Butterfly Harbor."

"Told in an attractive style, Bad Bay of Butterfly Harbor will be appreciated by those who enjoy a clean, but not a dull romance. I know I read it with pleasure."

"This is a really beautiful book, beautiful in the sense of how the story was told with so much simplicity and genuine emotions. This book revolves around second chances, forgiveness, acceptance, and moving on. :) Something that’s a very important thing and not many people find it in them to do. . . . It’s a very thoughtful and sweet book. While it’s an easy read it will give you a lot to think about."

Can you tell us what your writing plans are?

Well, I have a second book in the Butterfly Harbor series coming out from Heartwarming in June (RECIPE FOR REDEMPTION) and hopefully they’ll want some more books for the line. In February, my two best writing friends and I have a Valentine’s anthology MAKE ME A MATCH from Heartwarming featuring three bachelors/best friends who delve into matchmaking. We had a lot of fun with those stories. I’ll also be wrapping up my Tremayne Family romances in April with THE TROUBLE WITH NATHAN (this features a hero who’s a thief and a heroine who’s a con artist). And then I’m diving into the romantic suspense genre with a trilogy from Harlequin Romantic Suspense. THE BONDED TRILOGY centers around a trio of childhood friends bonded by the kidnapping and unsolved murder of one of their friends twenty years ago. I’m going to be busy! 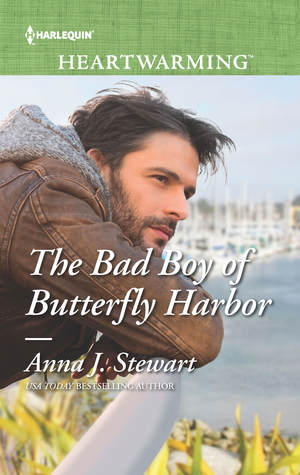 Two things keep Holly Campbell grounded: her precocious son and preserving her forty-year-old family diner in the face of expansion and change. She doesn't need a blast from the past like Luke Saxon, who's back in Butterfly Harbor after more than a decade away. The hard-luck kid who nearly destroyed her family, leaving her to pick up the pieces, is taking over as sheriff. She can't trust him, even if Luke's ideas for the town's upcoming anniversary seem to show he's trying to give back to their community. Has Butterfly Harbor found its unlikely savior? And has the widowed single mother finally found a man she can believe in, rely on…and love?

You’ve met Anna J. Stewart (or someone like her) before. She was the girl who spun in circles on the playground hoping her Wonder Woman costume would magically appear before playing cops and robbers a la Charlie’s Angels–as Sabrina (she was the smart one). Anna was the girl in the back of the class with a paperback romance hidden in her algebra book (and yes, she failed algebra).

Growing up in the 70′s and 80′s meant there weren’t a lot of YA books, so she ventured early into mainstream fiction and read Stephen King’s CARRIE at the age of 8. Discovering Nora Roberts and romance novels early in high school opened her eyes to the wonders of storytelling and the beauty of a happily ever after.

So here she is, many years later with an English degree from CSU Sacramento, an RWA Golden Heart nomination behind her, countless stories in her head, and a serious addiction to STAR TREK, SUPERNATURAL, and SHERLOCK. She recently wrapped up a nearly 8-year stint working as assistant to NYTimes bestselling author Brenda Novak where she helped run Brenda's annual online auction for diabetes research. When she's not writing or reading (which she never has enough time for!), she's working on dollhouse miniatures and tolerating her overly-affectionate cat named Snickers (or perhaps it's Snickers who tolerates her).