Beyond Anything In All Creation Book Blitz! Giveaway~ with Playlist! 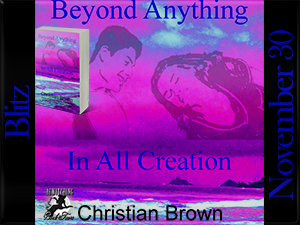 She’s anxious, but she might also be right. I do hope it’s not the end of the world. What do I know about this kind of stuff? I’m not sure what else to think. The world hasn’t exactly been in the best shape recently.

The long extinct volcanoes of our island home, as well as other parts of the world, still show signs of erupting at any moment. Earthquakes are a daily occurrence. The sun has almost completely vanished, leaving the world in a state of constant twilight. Fire has been falling from the sky off and on here for the last few weeks; meanwhile, other parts of the world seem to be in the middle of a miniature ice age, and the bodies of water that aren’t frozen have steam rising from their surface.

I would hardly call any of this normal.

The highly anticipated conclusion to the Beyond Heights and Depths trilogy is finally here.

Emmett and Ash are preparing for their big day. The two have overcome the greatest of evils to remain together. Together, they have won every battle, but the war is far from over. All signs point to the end of the world. The soul mates must face their toughest challenges yet. Relationships will be tested, sacrifices will be made, and a fight to the finish will decide the fate of the world.

This movie isn’t so bad. In fact, I can’t help thinking how real these scenes look. The special effects are spectacular. I feel like I am in the movie. I feel like I am walking along a dark trail. There’s no moon, which makes it incredibly difficult to see. Shadow figures begin to stalk from side-to-side. A gang of dark figures emerges out of the darkness. I can’t tell how many there are. Dozens of pairs of demonic red eyes suddenly open and stare at me. I seem to have walked into some sort of trap.
Oh no, this isn’t part of the movie, I realize too late. The swarm of shadow creatures rushes toward me. I try to turn and run, but I can’t move. I’m paralyzed with fear. What is happening to me? Wait, this must be a dream. I just need to wake up. The feeling of paralysis increases my anxiety. The more I struggle, the harder it is to move. You’re alright, I hear Ash’s voice say in my head.
Whew, thank goodness; I thought I was going crazy. Ash is on a run. I must have fallen asleep during the movie, so I am seeing this play out through her eyes. In the vision, I see that Ash is laughing, but I can’t hear her laughing. I take that as my cue to check out. Everything goes black for a moment, and then I open my eyes.
I’m looking at the ceiling of my house. I notice I am sweating profusely. I may not be in the middle of the fight, but the feeling of fear is completely real. I try to shake it off. In the safety of my home I have nothing to worry about, I try to remind myself. Yet, I can’t seem to shake the feeling of someone watching me. I’m afraid to sit up. This is ridiculous. You’ve fought demons of all sorts, died a few times, and have always come out on top. Surely you can deal with your childhood fears of the boogeyman.
I slowly sit up on the couch. The television isn’t even on. I wonder when I fell asleep. I hope it wasn’t during the movie. I try to rub the sleepiness out of my eyes. When I open them again, I am startled to see the image of a dark figure standing ominously behind me. I jump up from my seat, turn, and instinctively throw the first thing within reach at the figure, which happens to be a box of sour gummy candies.

End of the World and Love Stories

End of the world and love stories make up some of the most compelling stories in existence. Both have been told since the dawn of humanity. The variations of both make up a sizable portion of popular books, television, and movies, yet there is always room for more. People love these types of stories. It’s not hard to see why.

End of the world stories have been handed down from generation-to-generation pretty much since humans have walked the Earth. End of the world stories span across multiple cultures and beliefs. At some point or another, I would say everyone has heard at least one end of the world prediction or story. Personally, I can recall three times when people said the world would end, yet we are still here. In terms of mythical or scriptural apocalypse, every generation since those words were written has believed that they were living in the end times. This generation is no different. I know many people who believe we are living in the end of days. They believe the signs all point to the end, but every generation has believed this to be true.

Whether we are or not, I do not know. No one knows for sure if, when, or how the world will end. One thing you will also notice in the stories that have been passed down is that the end comes about in various ways; for instance, fire and brimstone, hand of God, ice age, and world-ending asteroid collision to name a few. In writing Beyond Anything In All Creation, I wanted to present a possible end of the world that contained familiar imagery but also give it my own spin. I set a lot of it in Hawaii because I have never read or seen anything in movies or television that depicted such events taking place in Hawaii. Moreover, I believe another compelling aspect of these stories is triumph of the human spirit. People want to believe that humanity will somehow continue to exist. Heroes will rise up, and we shall overcome.

I think love stories are just as compelling. They too have been handed down from generation-to-generation. Love is the one language that knows no limits and has no boundaries. Love stories reach beyond language, culture, and pretty much every barrier. Some would argue that there is no power greater than the power of love. Personally, I am inclined to agree; love is quite powerful. However, that doesn’t mean there won’t be obstacles along the way. I believe true love has to be tested. Love has to overcome challenges and obstacles in order to be true.

Throughout the Beyond Heights and Depths Trilogy, Ash and Emmett have had to overcome all sorts of challenges. They are soul-mates, but that is only the beginning of their love story. I believe even soul-mates have their love tested. True soul-mates remain together because their love is battle-tested and proven to overcome. That is what makes their bond so strong. To say they are in love just because they say so and have never really faced anything of substance would be boring and naive. The greatest love stories are those that have faced nearly insurmountable challenges and have somehow remained together, not the ones that met, fell in love, and that’s the end of the story.

Initially, I didn’t set out to write an end of the world story. I started with a love story. Eventually, the soul-mates had to face challenges. Then, it became a challenge so big that the fate of the world hung in the balance. Is there a greater challenge than that? Thus, I was given the chance to add my own love story and end of the world story to the many stories being told over and over again and passed down from generation-to-generation, and that’s a pretty amazing thing. 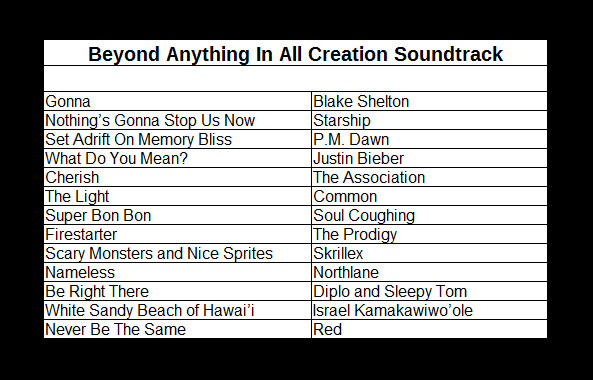 Christian Brown has been working with youth and young adults for most of the last 10 years. His passion is in helping others. He is also an anti-bullying advocate. He is the author of the Beyond Heights and Depths Trilogy and has other projects in the works. He currently lives in Honolulu, Hawaii with his wife and two young sons.

1 set of the trilogy in ebook form

3 Partners in Shopping, Nana, Mommy, and Sissy, Too!
http://3partnersinshopping.blogspot.com/

Around the World in Books
http://www.aroundtheworldinbooks.ca/