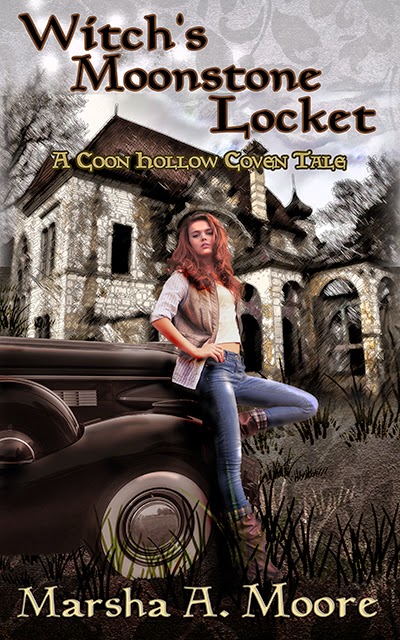 Twenty-three-year-old Jancie Sadler was out of the room when her mother died, and her heart still longs for their lost goodbye. Aching to ease her sorrow, Aunt Starla gives Jancie a diary that changes her entire life. In entries from the 1930s, her great grandmother revealed how she coped with her own painful loss by seeking out a witch from nearby Coon Hollow Coven. The witch wore the griever’s moonstone locket, which allowed whoever could unlock its enchantment to talk with the dead.

Determined to find that locket, Jancie goes to the coven’s annual carnival held in her small southern Indiana town of Bentbone. This opposes her father’s strict rule: stay away from witches. But she’s an adult now and can make her own decisions. She meets Rowe McCoy, the kind and handsome witch who wears the moonstone. He agrees to let her try to open the locket, but they’re opposed by High Priestess Adara and her jealous desire to possess him.

Desperate for closure with her mother, Jancie persists and cannot turn away from a perilous path filled with magic, romance, and danger.

Marsha A. Moore loves to write fantasy and paranormal romance. Much of her life feeds the creative flow she uses to weave highly imaginative tales.

The magic of art and nature often spark life into her writing, as well as watercolor painting and drawing. She’s been a yoga enthusiast for over a decade and is a registered yoga teacher. After a move from Toledo to Tampa in 2008, she’s happily transformed into a Floridian, in love with the outdoors. Marsha is crazy about cycling. She lives with her husband on a large saltwater lagoon, where taking her kayak out for an hour or more is a real treat. She never has enough days spent at the beach, usually scribbling away at stories with toes wiggling in the sand.

Every day at the beach is magical!