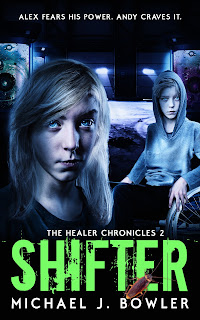 Shifter
The Healer Chronicles
Book Two
Michael J. Bowler
Genre: Teen and Young Adult Horror/Science Fiction
Publisher: Michael J. Bowler, Author
Date of Publication: 4/12/2022
ISBN: 978-1-7333290-5-7
ASIN: B09R2K41L7
Word Count: 105K
Cover Artist: Streetlight Graphics
Tagline: Alex fears his power. Andy craves it.
Book Description:
Fifteen-year-old Alex and his learning-disabled friends barely survived the events of Spinner, but their nightmare has only just begun.
Alex’s wheelchair has never stopped him from doing what he wants, but his supernatural power to heal every human ailment known to science has put him in the crosshairs of a dangerous doomsday cult that will stop at nothing to capture him and his long-lost twin, Andy, who can shift illness from one person to another. When the boys combine their “gifts,” they unleash the power to control life and death.
Now Alex, Andy, and the others have been kidnapped by the U.S. military. On a creepy Air Force base in the remote Nevada desert, they must decide who to trust and who to fear while uncovering secrets this base wants to hide from the world. Who is the young boy with unusual abilities who’s treated like a soldier? What is hidden in an ultra-secret hangar that no one can access? And what unnatural experiments are conducted in that closed-off laboratory?
As Alex unravels these mysteries, he strives to bond with his twin, but Andy is distant and detached, trusting no one. He’s also more attracted to the dangerous power they wield than Alex would like. When misplaced faith in science ignites a hidden lust for supremacy, rescue can only come from the most unlikely source, and Alex must confront a terrible truth.
The Healer Chronicles continue…
Book Trailer:  https://youtu.be/SiHwa4Ml3Ns
Amazon      Books2Read

He studied his silent brother, staring upward as though hypnotized.

Without dropping his gaze in the slightest, Andy said, “You dreamed about Teacher too, didn’t you?”

Now it was Martin who looked confused. He shifted position on the chair and that’s when Alex noticed the gun strapped to his belt. Martin studied them both in the dark, his face hidden in shadow. “What are you guys talking about?”

When Andy remained silent, Alex pulled his gaze from his brother’s back and faced Martin. “A teacher we both had. She’s part of the group that’s trying to get me. She says she’s gonna find me no matter where I go.”

Martin’s expression turned from grim to resolute. “I’ll protect you.” He patted the gun in its holster.

Alex eyed his brother once more. “She…she said you belong to her, Andy.”

Alex thought he saw his brother recoil, but the moon wasn’t completely full, so he couldn’t be sure.

“I won’t be in a cage ever again,” Andy said quietly, his voice almost a whisper, as though talking to himself. “I told that to Teacher and I meant it.”

Martin leaped to his feet, startling the boys.

Alex whirled to face him. “What?”

Martin threw a finger to his lips and reached down, pulling out the gun and pointing it over Alex’s head.

Now Alex heard it. Movement. The sound of people trying hard to be quiet, but a slight crunch of gravel gave them away.

Martin waved the boys behind him and darted in front, gun aimed toward the house.

A red light rounded the corner and before Alex could even think of the red light that had killed Juan back at the church, Martin fired his weapon. One pop, muffled, like he had a heavy sock over the barrel. The red light spun crazily and then toppled to the grass.

Alex glanced at Andy with wide eyes. They’d been found!

After that, everything happened so fast Alex could barely process it. Another figure rounded the corner with a gun and fired. A tiny burst of light accompanied the pop of a gunshot, and then Martin grunted, collapsing to the lawn.

“Martin!” Andy dashed around Alex’s chair and knelt by the unmoving form of their protector.

More figures rounded the corner of the house and bore down on them. Alex backed up, but suddenly Andy grasped his hand. Alex felt the rush of power surging through him—just as it had at the church when they’d brought Roy back to life—heavy floodwaters that meant their combined powers had been activated. He looked down at Andy, still kneeling beside Martin’s body.

Andy whispered, “Death, to me!”

Alex stiffened, his vision growing dim, his mind filled with a gray nothingness that terrified him.

As though from miles away, he heard Andy hiss, “Death to them!”

About the Author:
Michael J. Bowler is an award-winning author of the five-book urban fantasy series The Lance Chronicles, the mystery-thriller The Film Milieu Series, the supernatural-sci-fi The Healer Chronicles, and several standalone books. He also writes screenplays. His horror screenplay, “Healer,” was a Semi-Finalist, and his urban fantasy script, “Like A Hero,” was a Finalist in the Shriekfest Film Festival and Screenplay Competition, and his sci-fi screenplay, “The God Machine,” was the 2017 Scriptapalozza First Place Winner.
He worked as producer, writer, and/or director on several ultra-low-budget horror films, including “Fatal Images,” “Hell Spa,” “Club Dead,” and “Things II.”
He taught high school in Hawthorne, California, both in general education and to students with learning disabilities, in subjects ranging from English and Strength Training to Algebra, Biology, and Yearbook.
He has also been a volunteer Big Brother to eight different boys with the Catholic Big Brothers Big Sisters program and a long-time volunteer within the juvenile justice system in Los Angeles.
He has been honored as Probation Volunteer of the Year, YMCA Volunteer of the Year, California Big Brother of the Year, and 2000 National Big Brother of the Year. The “National” honor allowed him and three of his Little Brothers to visit the White House and meet the president in the Oval Office. He also adopted a child in 2020.
His goal as an author is for teens to experience empowerment and hope; to see themselves in his diverse characters; to read about kids who face real-life challenges; and to see how kids like them can remain decent people in an indecent world. The most prevalent theme in his writing and his work with youth is this: as both a society, and as individuals, we’re better off when we do what’s right, rather than what’s easy.
Website: www.michaeljbowler.com
YouTube: https://bit.ly/3rDSdfp
Twitter: https://twitter.com/MichaelJBowler
Tumblr: http://michaeljbowler.tumblr.com/
Pinterest: http://www.pinterest.com/michaelbowler/pins/
Instagram: https://www.instagram.com/michaeljbowler/
Facebook:  https://www.facebook.com/michaeljbowlerauthor
Launch Team Sign-up: https://michaeljbowler.com/launch-team-sign-up/ 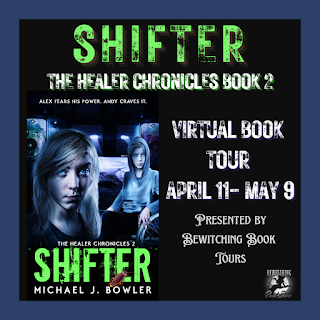