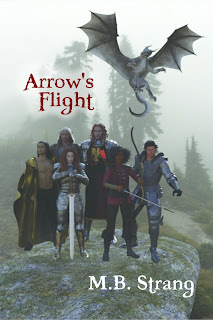 Arrow’s Flight
Knights of the Pearl Order
Book One
M. B. Sträng
Genre: Fantasy
Date of Publication: 02/17/2022
ISBN-13: 979-8418478887
ISBN-13: 9781005631352
ASIN:B09SP9R1YX
Number of pages: 277
Word Count: 99,600
Cover Artist: M.B. Strang
Book Description:
An unknown menace moves through the polite society of Pearl’s Holding. If not caught in time, it will bring down not just the hallowed Knights of the Pearl Order, but also everyone who lives and works with them. The answer lies with a young woman of mysterious origins whose life has been touched by tragedy. To fulfill her potential, she must confront her past and discover a future more amazing than she’d ever imagined and find the inner strength to fly.
She’s not alone. A handful of Knights, a hearthmage, and their magickal companions all test their physical and magickal limits to make things right before it’s too late. Otherwise, dark forces will overtake the Knights for good.
Amazon     Smashwords

Beads of sweat rolled into my eyes, and I used the back of my wrist to wipe my forehead as I continued to cut flesh from the lamb’s carcass. The task became difficult as my knife had dulled over the years, and there was no way to sharpen the blade. Scraping it over a rock seemed to make it worse, not better. Taking the animals thumped guilt into my heart, but I didn’t think that the people in the valley would miss them much and I was tired of eating fish. Only once had one of them ventured anywhere near my cave, but he never came close enough to find the bough-covered entrance. I hid, just like my mother said to do. The man soon left, but I’d stayed hidden for hours.

Rumbling filled my belly, and I sliced at the flesh with greater determination. Figuring out how to make fire had come naturally. As for the rest of it—what my parents could do, but I had not yet learned—well, Mama and Papa were not here to teach me. And besides, Mama said to keep it hidden. Some, especially the Brethren, would kill us for what we were.

“Mama said to hide.” I spoke out loud to myself. It had been a long time since I’d heard another voice, but at least I could hear my own. My cave was too far from the valley to hear the people there. The few times I ventured close to the hamlet, I heard their language was not my own native tongue. Suspecting I had lost some words, I spoke more often now, and practised all the languages I knew in order to not forget more, and so my throat wouldn’t lose the ability to speak. I talked to Mama and Papa, wishing they were here. I visited Mama out there in the woods. Just bones now. I had taken the arrow out of her ribs, broke off the shaft, and wore the arrowhead on a cord woven with her hair. It was my way of taking my mother with me, keeping her close.

Heat flushed my forehead. That had been happening more often lately. Despite the warmth in my brow, I shivered. Waves of dizziness washed over me. I finished with the lamb and cleaned the knife on a bit of parchment, one of several scraps I found floating down from the sky one day. A piece had drifted across my face, and I glanced up to see what appeared to be a book flying by. The dropped parchment was no less strange: ornate script scribbled all over in green ink. I had grown tired of trying to decipher the bizarre symbols, many of which different than any of the languages I had learned to read, and found other uses for the parchment pieces.

And now I used another sheet as a mop for my sweating head.

Sitting back on my heels, I clutched the arrowhead in my fist. Once more the events of that long-ago day forced themselves into my mind. That terrible day when a man appeared on the ridge. The sun behind cast him in silhouette, and we could not see his face. He wore the dull robes of the Brethren. They billowed, though there was no breeze. His limbs writhed and twisted and cloth rent as wings thrust out, the man’s body distorting until it resolved into a white wyrm, like a dragon but certainly not a dragon. A foul stench emanated from the beast, and I started to gag.

I saw my father struggling. I knew what he was trying to do, but he could not do it. I knew why my mother could not do it right now but why couldn’t my father? Before they had a chance to ready weapons, the wyrm flapped its leathery wings and issued a bone-jarring shriek. Lightning spewing from its terrible maw, past its narrow, gleaming teeth. That creature took flight, swooped down, snatched up my father in its talons, and carried him away.

“Teban!” My mother screamed my father’s name over and over that the word may reach his ears and give him hope. She fell to her knees, wracked with cries of anguish. Clasping me tightly, she held me for what seemed like a long time, both of us sobbing violently. At last, she gained control of her breath and said, “Quosa, I must go after him. I will get your father back. You must hide.” She stood, and shaking her head, she said, “It must be because of the signatures. That’s why he couldn’t—” Her words broke off as we saw another one of the Brethren approach. She screamed, “Hide!” as the man loosed the arrow that lodged in the middle of her chest. 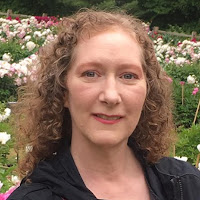 About the Author:
M.B. Sträng has been happily married to Timothy for over 33 years and they are the proud parents of a Biologist who has earned a Master’s degree. M.B. recently worked at a domestic violence shelter, but now writes full time. She has black belts in two martial arts and occasionally teaches self-defence classes. She enjoys writing (of course), painting, drawing, sewing, and embroidery. At the age of 53, M. B. learned that she is autistic, and suddenly her whole life made sense. She fences with messers, longswords, sabres, and arming swords and bucklers fairly regularly at the Ann Arbor Sword Club, and is a Knight-Magister in the Order of Paladins. Arrow’s Flight is her first novel.
Web site: https://mbstrang.com/
FaceBook: https://www.facebook.com/MBStrangAuthor/
Goodreads: https://www.goodreads.com/author/show/22242754.M_B_Strang
Amazon Author Page: https://www.amazon.com/M-B-Strang/e/B09SQCBZDT/
Smashwords: https://www.smashwords.com/profile/view/TemperedBlade 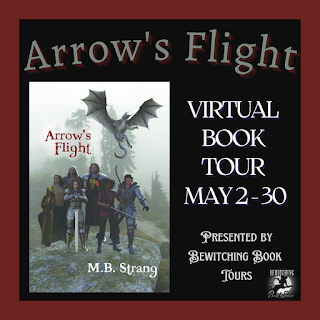