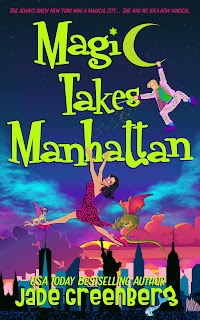 Magic Takes Manhattan
Manhattan Magic
Book One
Jade Greenberg
Genre: Paranormal Women’s Fiction / Romantic Comedy
Date of Publication: 04/26/2022
ISBN: 9781957615004
ASIN: B09WQGRP43
Number of pages: 186
Word Count: 30k
Cover Artist: Jennifer Schatten
Tagline: She always knew New York was a magical city. She had no idea how magical.
Book Description:
A hilarious, quirky, and enchanting, “riotously funny night of magical mayhem” from USA Today bestselling author, Jade Greenberg.
She always knew New York was a magical city. She had no idea how magical.
What do you do if you tend to attract unfortunate incidents? Make it work for you, that’s what. Take me, Mandi Muscovitz, independent insurance claims adjuster and master of disaster. I’ve made a career out of bad luck. But no matter how good I get, every year on April 30th, my birthday, mayhem always ensues. This year’s no different, and I expected that. What I did not expect was to find myself at the center of a magical apocalypse.
Lucky for the fate of the universe, I ain’t new to this type of stuff. And it don’t hurt I got a hot wizard to stare at while I save the planet from an eternal winter.
Yeah, alright, I may have caused the problem, but it wasn’t intentional. And I’m going to be the one to fix it, so it’s like it cancels itself out in a way.
But whatever. Don’t worry. I got this… Probably.
Join Mandi on her May Day adventure as she saves the world in Magic Takes Manhattan, a not-to-be-missed, humorous Paranormal Women’s Fiction novella.

Sometimes I’m blown away by my city. Trudging through the tedium of daily life, trying to survive, it’s easy to forget how Liberty Island is so close, or Ellis Island, or any islands with tourist attractions.

“The last time I was here, I was eight.”

As we head toward Lady Liberty, I swear she looks down and gives me a wink.

“Did you see that? She winked at me.”

“Maybe she finds you attractive.”

“You should be so lucky,” Jack says, surprising me by having a sense of humor.

As we approach the entrance, I stop. “Don’t tell me I got to walk it.”

With a cocky grin that makes him look too hot to be human, he wraps his arm around my waist and pulls me in close.

Hello. This has taken a strange turn. Can’t say I hate it. The man is gorgeous. If a golden sunray were a person with an eccentric sense of style, it’d be him. Even so, I’m not marrying a stranger.

With a wave of his hand, we shoot straight up, flying past the top of her head into the sky, and I scream at the top of my lungs the entire time. Next thing I know, we’re in a shrine made of light and gold that shines like we’re standing inside the sun. It’s a big, ornate room suspended above the Statue of Liberty.

“Please try something for me.”

“Uh oh. If it has anything to do with jumping out one of these windows to see if I can fly on my own, the answer is no friggin’ way.”

Oy, I feel like a dope, but I stop myself and open to the possibilities. Hello, I’m in a magic temple floating over the Statue of Liberty. Anything is friggin’ possible. Time to give this a real shot. What if Mr. B’s right? What if I’ve got powers? Who knows?

“Let’s start with something simple any witch could do—I’d like you to float a feather.”

A small white feather flutters in, hovers before me, and drifts toward the ground.

“If it touches the floor, the floor will disappear,” he says, and my heart jumps into my throat.

With as much speed as I can muster, I try to snatch the thing. No matter what I do, it flies away. Soon enough I’m chasing this thing around like a psycho, flapping whatever parts necessary to create enough wind to keep it afloat.

“The stakes are too high!” I shout as I keep it up with the breeze from my spastic body movements.

Wait, I know! I pull out my lint roller with such speed it might as well be magic and use the rest of my body to guide the feather to the sheet of stickum. Thank God, it works!

“I know, but I don’t want to die like that, and I don’t have any powers. I’m sorry.” I plop down onto the gold floor etched with sunray patterns.

He takes a paper out of his pocket and reads as he paces before me.

“Have you ever felt like you knew when the disasters you experience would strike?”

“Only around my birthday because it’s always a disastrous time. The others catch me unaware, even now. I mean, I’ve gotten to where I can spot and avoid them, but that’s from experience, not from a magical power or nothing like that. It’s my job to notice those things.”

“Do your dreams ever come true, or your nightmares?”

“If I remember my dreams, it’s always boring stuff, like I’m at work filing or some random crap. I don’t have interesting dreams. Never have. They come true, but it’s because I’m dreaming about the stuff I do every day.”

“Perhaps not,” he says and sighs, massaging the bridge of his nose.

“If I had magical powers, I’d have used them by now, wouldn’t I? It’d be great to be a goddess, but that’s not my reality. And it’s cool. Most people don’t have magical powers. I’m happy to be most people.”

“Maybe we could try one more time. Maybe you’ll undergo some transformation if you find them–”

“I… I’m sorry, but I’ve had a very clear image of her in my mind my entire life and you are nothing at all like her.”

The sigh that escapes me is unavoidable.

“Look, I want to be offended, but I saw her in Evelyn’s memory. She’s smoking hot, and I am nothing like her. That’s alright though, because she’s a goddess, and I’m just a person.”

“If they buried the magic… Maybe we could try—”

“—Alright, let’s try again.” I pull myself up to standing. “Go ahead. Give me another test. Can it not be a life-or-death thing, though?”

After a moment, he proffers his arm, his hand reaching into a ray of light that shines in through one of the ornate windows. He grasps the light and squeezes it. When he opens his hand, a glowing amber colored marble is there.

“Catch the light in your palm and make it solid.”

“Oh, sure. No problem. Make light solid. Easy peasy,” I say and walk over to the same sunbeam.

When I try to grab the light like he did, nothing happens.

“Maybe it’s that sunbeam that’s the problem, since you already grabbed it,” I say, trying to appease him and go to the next one, and the next. Each time, reality reminds me it exists by laughing in my face. “I feel like an idiot,” I say, and he sighs. “I suck. Admit it. I suck at magic.”

“This is not the way it’s supposed to happen,” he says as he sits on the floor, his head falling into his hands.

Defeated, miserable, and distraught, he pouts. I sit and give him a pat on the back.

“I wish I was her. Believe me, I do. You’re a jerk, but you’re a handsome jerk. Who’s not into me. Most everyone else is though, so I’m not worried.”

“Belvedere says it’s the human body—it’s nothing like living as a god—but visions of her plague me. If I look somewhat like who I was, why wouldn’t she?”

“If you’re a pawn and not a minion, then the Winter Witch cursed you too. I’m not so sure being near each other is best for either of us. We’re at the brink of the apocalypse.

Somehow, you are at the center, perhaps to create disasters, obstacles. From what I’ve gathered, you’ve been disastrous since birth.”

“—Is part of a curse to keep me and Flora apart, to end our reigns as gods. Which means the death of Spring and Summer for eternity. No growth, only decay. Nothing to harvest. Only cold darkness year-round. If I die, if she dies, both seasons die with us. Gods are immortal for a reason.”

“You’re a god now? An actual god?” I say and snort. Talk about ego problems.

“I am the God of Summer. Flora is the Goddess of Spring. That day, we were to commit to each other for eternity.”

“But I was born the day before—”

“Of course, the Winter Witch knew what she would do to us before she did it. She was prepared. With you and who knows who else.”

“Basically, you’re saying all the tragedy in my life is because of you and your girlfriend and the old hag who hates you, and now the end of the world is going to happen because of me.”

“Put in the most remedial of ways, yes.”

Talk about screwing someone over. I’m cursed because of this crap I ain’t got nothing to do with no how? Who does that to a baby that ain’t even born? There’s no way I’m causing the end of the friggin’ world. This winter witch can keep dreaming. She picked the wrong girl… woman… whatever. And if I am cursed, and she’s the one who cursed me, I wonder.

“Let’s say I find your goddess for you. Does my curse break too?”

“If your misfortune results from this curse, yes, it would, in theory, break too. But if we find her, Mandi, I promise you, I will break the curse for you. I am a God. When I have the full force of my powers returned to me, I will remove your curse and bless you. You have my bond.”

“Does this blessing include magical real estate? Specifically, I could use a rent-free penthouse with magical perks, like built in cleaning and laundry. And one of those enormous gardens the size of Central Park like you got. That’d be incredible.”

He cracks a smile and almost laughs, but I’m not kidding.

“I’m being serious, Jack. If you could hook me up, I’d appreciate it. Living without disasters…” I stop and think about what that might be like. “I never thought about that as a possibility. That’d be…” Knowing nothing was going to happen to me would change everything.

“I guess that’d be blessing enough. But I’m homeless. I don’t want to go back to Danny.”

“How would that even be an option?”

“What do you mean? I got nowhere else to go.”

“What about a friend who might let you stay on their couch?”

“You don’t appear to be introverted. In fact, you should be far more introverted than you are.”

“Alright, I’ll ignore that because you’re stressed. Don’t you worry, Jack. A witch-goddess, I may not be, but I fix screwups for a living. You’re looking at an expert—this is what I do. I got this,” I assure him. “Come on. Let’s blow this sunbeam. We got work to do. I got a plan. Magic us on out of here.”

“I knew it wouldn’t work,” he says with a sigh, takes out a golden whistle, and blows it, but I don’t hear nothing.

“Dog whistle?” I ask with an arched brow. “I’m not riding no dog back to the city, magic or not.”

As the vaulted ceiling opens to the sky, a massive golden dragon glides down and lands, perching on the top of the wall. A staircase of light materializes, and we climb it to a landing. 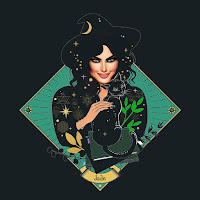 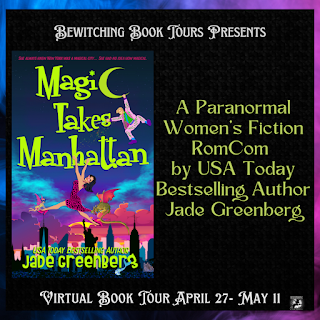