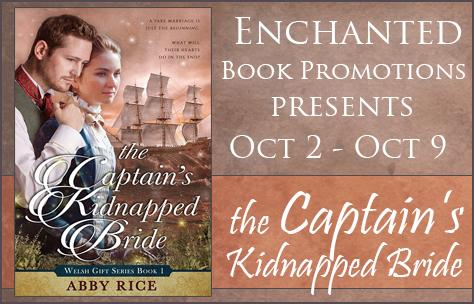 The last thing Hetty Pritchard ever wanted was a husband. Until a joke-gone-wrong lands her aboard an unfamiliar schooner headed for Jamaica -- with the Captain himself snoring in the bunk beside her.

Now a ruined woman, Hetty has no choice but to accept the grouchy mariner’s reluctant solution: a temporary fake “marriage.” Purely for show, of course.

And if navigating a ship-full of men, pulling off a fake relationship with a total stranger, and making her way back home weren’t troubles enough? Add in troubling wisps of ‘second sight.’ And an unexpected simmering attraction to her new, fake husband.

A stand-alone sweet historical with touches of the paranormal, and a heart-tugging HEA ending.

Get the book on Amazon

These were crazy thoughts, for sure. Leaving home without a chaperone? No proper family would have me. Growing up here by the harbor had given me a clear-eyed view of the sad fate that awaited the denizens of Harlots’ Row.

I grabbed a slender taper, flicked a flint, and set about lighting the wicks of the kitchen lamps, then moved on to the dining room.

Beyond the tall, narrow windows fronting Bank Street, dusk was closing in fast. The familiar row of shops, warehouses, and fellow inns across the way had merged into a single, solid mass of grey, broken only by the white stone Customs House in the center. The riverbank itself, for which Bank Street was named, had long ago been blocked from view by the tightly-packed buildings. Once upon a time there must have been a fine view of the deep-water harbor behind them. “Once upon a time” being a good century ago, when New London was still a thriving whaling mecca.

The gathering gloom felt peaceful, quiet – an odd counterpoint to my inner turmoil. For once, the cobblestone street outside was quiet, too. Rain had trickled down all day, leaving enough puddles to deter any but the most determined traveler. Across the way, a bedraggled deliveryman threw his hands up and stomped away while I watched, abandoning his wagon to the mud.

It was almost too quiet, really. The air felt strangely heavy. Odd. Surreal. Pregnant with – something.

Adventure really ought to be my middle name. I’ve ridden cross-country on a motorcycle; crewed on a real-life square-rigged ship; built and rehabbed houses/apartments; and helped seek justice for crime victims as a District Attorney.

Nonfiction is where I cut my writing teeth, in over 200 magazine stories. (As you probably guessed, natural health was one of my fave topics!) That led me into books. Take a peek at those and my rollicking history blog on www.Clairitage.com.

These days when I’m not dreaming up new stories about heroines, health, or history, I’m lending a hand to my garden-crazy husband, or scanning 1860s newspapers for bits of forgotten gossip.

I love hearing from readers! If you’d like to connect, drop me an email at: