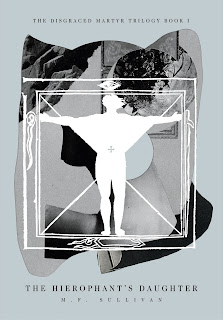 Tagline: Dive into the first volume of a bleak cyberpunk tahgmahr you can't afford to miss. What would you sacrifice to survive?

By 4042 CE, the Hierophant and his Church have risen to political dominance with his cannibalistic army of genetically modified humans: martyrs. In an era when mankind's intergenerational cold wars against their long-lived predators seem close to running hot, the Holy Family is poised on the verge of complete planetary control. It will take a miracle to save humanity from extinction.

It will also take a miracle to resurrect the wife of 331-year-old General Dominia di Mephitoli, who defects during martyr year 1997 AL in search of Lazarus, the one man rumored to bring life to the dead. With the Hierophant's Project Black Sun looming over her head, she has little choice but to believe this Lazarus is really all her new friends say he is--assuming he exists at all--and that these companions of hers are really able to help her. From the foulmouthed Japanese prostitute with a few secrets of her own to the outright sapient dog who seems to judge every move, they don't inspire a lot of confidence, but the General has to take the help she can get.

After all, Dominia is no ordinary martyr. She is THE HIEROPHANT'S DAUGHTER, and her Father won't let her switch sides without a fight. Not when she still has so much to learn.

The dystopic first entry of an epic cyberpunk trilogy, THE HIEROPHANT’S DAUGHTER is a horror/sci-fi adventure sure to delight and inspire adult readers of all stripes.

Excerpt:
The Flight of the Governess

Ah, not Cassandra! Wake not her
Whom God hath maddened, lest the foe
Mock at her dreaming. Leave me clear
From that one edge of woe.
O Troy, my Troy, thou diest here
Most lonely; and most lonely we
The living wander forth from thee,
And the dead leave thee wailing!
—Euripides, The Trojan Women

M.F. Sullivan is the author of Delilah, My Woman, The Lightning Stenography Device, and a slew of plays in addition to the Trilogy. She lives in Ashland, Oregon with her boyfriend and her cat, where she attends the local Shakespeare Festival and experiments with the occult.

Find more information about her work (and plenty of free essays) at https://www.paintedblindpublishing.com 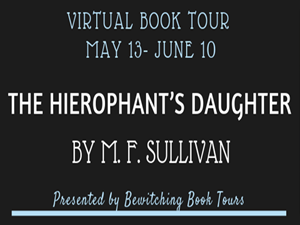