PreOrder/Release Blitz: Two Scandals are Better Than One 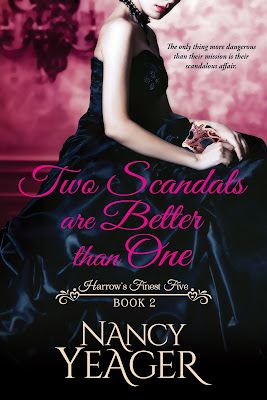 A foray into London’s seedy underworld will unmask their hidden desires.


A gentleman on an illicit lark
Edward, the upstanding Viscount Meriden, is desperate for one reckless adventure. After years of holding his crumbling family together, he finally has the chance at one night of abandon at a debauched house party, where he meets a masked mystery woman. He longs to uncover all her secrets. But when he realizes she’s an old friend on a dangerous mission, he insists on becoming her protector.
A lady on a dangerous quest
Miss Lucinda Wagner is the only woman in a family of men rumored to be spies. When her father goes missing, she infiltrates a treacherous world to find him. No one suspects her double life until her childhood friend Edward discovers her secret. Now “Steady Eddie” insists upon watching over her. To gain his silence, she allows him join her search.
A journey into the belly of the beast
As Luci and Edward delve deeper into the criminal underworld, their lives turn upside down. Danger lurks around every corner. Threats assail them from all sides, and the only safe harbor in the city is in each other’s arms. Until the sparks between them threaten to ignite their long-denied passion.

Luci steeled her spine in preparation for Lord Edward’s questions. What are you doing here, Miss Wagner? Why are you wearing that mask? Where is your father? Do you know what my sister will do when she finds out I met you at a den of iniquities and didn’t immediately drag you out of it?
But he wasn’t asking anything. He wasn’t speaking at all. He was staring at her again, as he had when they had spotted each other across the room, like he had when he had sat down beside her. He had the look of a man who had just woken from the most pleasant dream, but was still half in it. And for the life of her, she swore he hadn’t recognized her, that he still didn’t recognize her.


He slowly looked her up and down, his gaze lingering over every exposed inch of skin—and there were more than were decent—and every curve exhibited by her expertly fitted costume. “Do you have any idea how beautiful you are?” His look was feral and possessive, but his voice was silky smooth and calming.


She had known this man since she had been five and he had been Emme’s protective ten-year-old brother. When she was twelve, she had said more prayers than she would care to admit that her best friend’s seventeen-year-old brother would be moved to kiss her, which he never had. She had rolled her eyes when she was seventeen and learned he had taken a lovely but boring young widow as his mistress. But in fifteen years of knowing him, he had never sent such a shock of awareness through her body.


The man looking at her right now, the man who had come to this depraved party for a purpose she couldn’t fathom, had no thought for protection or integrity or discretion. The man ravishing her with his gaze believed she was a stranger.

“I’m sorry for what that horrible man said to you. And I have no expectation...” He shook his head. “That’s not true. Perhaps I did have an expectation, or at least a hope.”
He stepped close to her and slowly lifted his hand toward her face, stopping just inches from touching her. Luci didn’t know whether her heart pounded most from the worry he might pull off her mask, the hope he might kiss her, or the fear he wouldn’t.
“I won’t touch you if you don’t wish it.”

She shouldn’t be in this house. It had been foolish to come looking for the leader of the Elephant and Castle gang, as her father would tell her if they were here. But he wasn’t. Her father’s disappearance was at the root of all of this.


But Edward had kept her safe. Whomever he was trying to be right now, whatever role he was playing, Steady Eddie was still at the center of this man. He was a good man. A fierce protector. And whether it was fear, adrenaline, or sheer attraction, she desperately wanted him to kiss her.

“The lady gives her permission for a kiss. Just a kiss.” 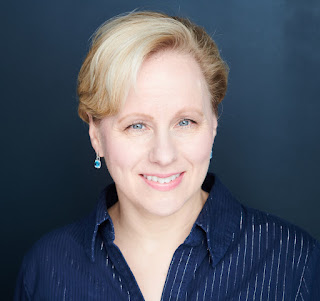 Nancy spent her early years longing to be an English countryside vet thanks to James Herriot’s All Creatures Great and Small series, and an adventurist archaeologist like George Lucas’s Indiana Jones character. After studying veterinary pre-med and earning an anthropology degree, she realized her true passion is story in all its forms.

When Nancy's not writing, reading, or binge-watching story, she's often pursuing a physical challenge like studying Krav Maga or aspiring to achieve the perfect crow pose. She also spends her time drinking too much coffee, not enough red wine, and just the right amount of Bourbon. She lives in Maryland with her fabulous family, which includes some very spoiled rescue cats.