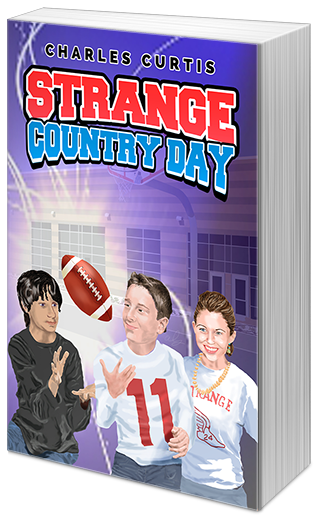 Alexander Graham Ptuiac, the son of an inventor, wants to play for the school’s football team. During tryouts, and under the watchful eye of the team’s coach, he suddenly manifests mysterious superhuman powers. Alexander makes the team, but not before the some ill-intended adults take notice, putting his life in danger.
Alex struggles to suppress and control his strange new abilities, worried about exposing his secret and being kicked off the football team. Then he befriends Dex, a diminutive classmate who can somehow jump as high as ten feet in the air. Seems Alex isn’t the only one at school with a secret.
As the school year unfolds, Alex will find himself the target of bullies, holding hands with his first crush and discovering the shocking truth about himself and his parents.

(Alex befriends Dex, a diminutive seventh grader with pointy ears and sharp teeth. When they find themselves together in gym class playing football, Alex connects with his new pal on a miraculous play … and it looks like there’s more to his new friend than Alex originally thought)
With my team down by a few touchdowns (no thanks to blown coverage by yours truly) and with about two minutes left in gym class, I had hit the tipping point. “I’m QB!” I announced to whoever would listen. I heard everyone groaning and protesting, but I told them, “Just one play, okay?” Eyes rolled in unison.
I turned to Dex and mouthed, “Go. Long.” He nodded. We lined up, with most of the kids on both sides looking apathetic. No one cared since it was the end of class, the end of the school day, and the game was already decided. But this was my chance. I felt myself get nervous as I began the play. That’s when I noticed Coach Schmick strolling over with a whistle in his mouth. All that nervousness turned into total fear. The football coach was watching me. He hadn’t looked at us once all game long and now here he was, staring at me.
That’s when it hit me. For the second time that day. Marshmallows. Blurriness.
Water running through my veins.
Squeeeeeeeeeeeeeeeeeeeeeeeeeeeeeeeeeeeeeeeeeeeeeeee.
I stumbled back and heard myself yell, “Set-HUT!”
My eyes re-focused, and I could see that nobody was doing anything, except for Dex. He was darting down the field as fast as I’ve ever seen anyone run. I felt myself automatically go through the motions. Right hand with football by my ear. Follow through with hips on the release. Let go.
I heard Coach’s whistle start to blow to signal the end of class, but he stopped mid-tweet as the pass sliced through the air. It was a perfect spiral. I couldn’t believe it myself as I watched it fly. To my horror, I had thrown it at least twenty yards past Dex.
But he streaked toward the little orange cones that delineated our endzone. The ball was definitely headed way over his head and out of bounds.
That’s when Dex did something shocking. Still in stride, he crouched down and leapt up. He looked like a much smaller version of Michael Jordan, getting higher and higher for what seemed like forever. At the top of his jump, which must have been at least 10 feet in the air, he reached out and the ball landed right in his hands. As if he had wings to help him, he floated down and hit the ground nimbly on two feet, just inside the back of the endzone.

Charles Curtis is a writer and journalist based in New York City. He has reported and written for publications including NJ.com (where he is currently the site’s sports buzz reporter), The Daily, ESPN.com, ESPN the Magazine, Bleacher Report, TV Guide and Entertainment Weekly. Charles has covered the NFL, MLB, NHL, NBA, golf, tennis and NASCAR. He has also written about television, film and pop culture.

In addition, Curtis has also written, produced and was featured in videos for ESPN.com and The Daily. He has made radio appearances on stations including 92.9 The Ticket in Bangor, Maine, WLIE 540 AM in Long Island and on morning shows across Canada via the CBC.
He can be reached on Twitter: @charlescurtis82.