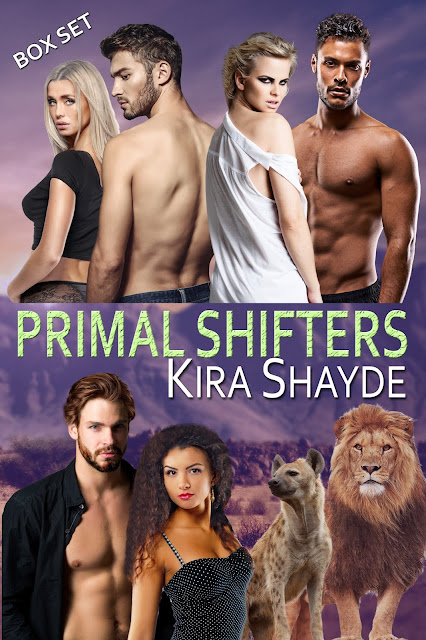 When Holly Ainran’s brother goes AWOL from an elite military force in Tanzania, she confronts Commander Bane Ojore, a rare melanistic lion shifter. Sparks ignite, but Holly finds a challenge in taming this brooding, hostile beast. Bane does not expect the daughter of a high-ranking parliamentary executive to be a smart, code-breaking expert adamant about abolishing the lion caste hierarchy and ending the lion-hyena conflict. Nor does he expect such a stunning lioness to fall for him. But Bane’s job is to find the traitors supplying weapons to the hyenas, and all signs point to Holly’s brother. Holly won’t give up on her brother though…or Bane. As their passion escalates, so do the risks, the danger, and ultimately, their love.

Months as a POW leaves lion shifter Fix Ainran struggling to recover, but he can’t get the curvaceous Caryn Plumar out of his mind. Yet the beautiful daughter of the hyena chairman only torments the disabled former soldier with heated trysts before pulling away. No matter how much she desires Fix’s touch, Caryn’s obligations involve more than fighting for an independent hyena state in a land ruled by lions and fraught with war. She must sacrifice any chance of happiness and freedom by marrying within the clan to ensure her safety. Unable to stay apart, Fix and Caryn defy societal rules and risk their lives as they battle enemies, search for the truth about his captivity...and fall in love.

When Alina Van der Stel agrees to spring an imprisoned lion shifter in southern Africa and hand him over to the rebels in return for information about her birth parents, she doesn’t expect the man to capture her mind as much as he does her body. Falsely accused of conspiracy, Kipper Lumbwi has no intention of allowing the icy blonde to sell him to the very traitors who landed him a stint in prison. Yet her ethereal blue eyes reflect years of sadness as a snow leopard trapped in a land of lions, and he understands her need to find her true kin. Except she’s not the only one targeting him. With a bounty-hunting hyena and the Defence Force in pursuit, Kipper and Alina agree to an alliance…one that leads to her finally experiencing the joys of desire. Can their passion earn them the trust they’ll need to survive?

Giveaway Details:
1 winner will win a finished copy of
PRIMAL SHIFTERS Box Set & a $10 Amazon GC, US Only.